John Dickinson called himself a farmer, a title he used when writing his most famous series of letters that argued against the Townshend Acts in 1767. John's love of the land and his background in farming started when he was born. He was the son of a wealthy tobacco planter. In fact, his grandfather and great-grandfather were also tobacco planters. He readily assumed the role of landlord and cared for the land his father bequeathed him the rest of this life. 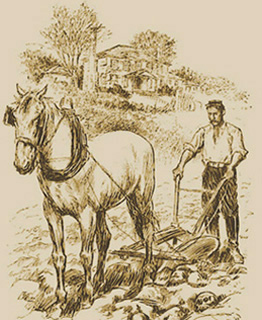 In the last quarter of the 18th century, John Dickinson owned more land than anyone else in Kent County, Delaware. His landholdings in Delaware began with his inheritance; however, John aggressively purchased more land on his own. His marriage to Mary Norris of Philadelphia allotted him even more property, as all of her possessions became his. John's real estate included land in Kent and New Castle Counties, Delaware, as well as properties in Pennsylvania. His favorite place to call "home" was his boyhood farm in Kent County, Delaware. He described it as a "prospect of plenty" and called it the "Homeplace."

The number of acres John owned in St. Jones Neck in Kent County totaled over 5,000 by the time he died in 1808. This property was his favorite, but all his land was carefully supervised with much intervention on his part. While John was influencing the political arena of Philadelphia, his tenants were growing wheat, rye, barley, and raising orchard fruits.

Each tenant, whose backgrounds varied, oversaw the upkeep and production of a portion of his land. Many tenants reported to John on a regular basis. If they could not meet the lease agreements, they often had to find work elsewhere. The successful tenants specifically followed the lease agreements to produce market quality grain. Other tenants agreed to produce more than crops. William White, who tenanted "Homeplace," was required to produce candles, soap, lard, wool, flax, beef and pork among other things. Tenants are often viewed as a landless population, but in the case of William White, he owned land in his own right. Other tenants for John included free blacks and poor white farmers who owned very little or never acquired land.

The land on Jones Neck was typical of coastal Delaware. It consisted of marsh, wooded, and cleared land. All features of the land were utilized. The cleared land produced grain crops. Tobacco ceased to be a profitable crop in Delaware after the early 18th century. Orchards provided a source of fuel. Heating, cooking, laundry fires, and many other tasks used wood as a fuel. This became a problem in the latter part of the 1700s when trees were becoming scarce on the landscape. John Dickinson saw the need to reform and required all building repairs and fence building to be completed with dead tree material. However, under special circumstances, he specified that live trees could be damaged to complete many projects.

John's attempts to improve the landscape was part of a larger effort by many at a full scale agriculture reform. John Spurrier, who may have been a tenant of Dickinson's at one time, wrote a book on reform methods. Gentleman farmers, like Dickinson, debated the reform issues and implemented many programs. This did not alleviate the problem that had become too intense for a quick reform by the end of the 1700s.

Styles of fencing and ditching efforts to better utilize marsh land were two methods of agricultural reform that Dickinson carried out. However, John died in 1808, just two years after he rebuilt his boyhood home that was damaged by fire. Dickinson's "prospect of plenty" was in need of careful management. Sally Dickinson, John's daughter, assumed the responsibility of running the Jones Neck property until her death in 1856.