The institution of slavery was ensconced in Delaware by the time John Dickinson became a slave owner.  At one time, he owned as many as 37 slaves. He used his slaves in a manner typical to the type of agriculture that was prominent in Delaware in the second half of the 1700s. John, who owned property in Pennsylvania and Delaware, divided his slaves among the properties that needed labor. Work performed by slaves on Dickinson's properties included cropping, mending fences and buildings, ditching, and odd jobs.

When Samuel Dickinson died, he left slaves to John in his will. With the help of slave labor, John continued to administer the properties he also inherited. As time passed, he began to make transactions with slaves to fulfill different obligations. He 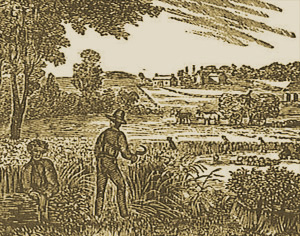 purchased slaves from his brother to keep some families together. When asked, he purchased a slave to keep her from being sold out of state.  Even though John Dickinson did not condone the beating of slaves to keep them malleable, many other masters did.

In Kent County, Delaware where the boyhood home of John is located, slaves were used primarily for agricultural work. Grain, wheat, and corn were the cash crops. John Dickinson required his tenants to raise the crops in some cases with the help of his slaves. This was a profitable business for him. It was expensive, however, to pay for the upkeep of many slaves that produced his crops.

In order to produce tobacco, a labor intensive crop, many people were needed all year to complete the different processes. Grain was planted in the spring or fall. Fields were prepared, but after the grain was planted, there was little work until harvest. In contrast to tobacco, grain farming required intense labor only twice a year. Therefore, grain farming precluded the necessity for a lot of hand labor, so his slaves were more diversified than those who worked in tobacco, which was still very popular in Maryland and Virginia. The diversity of slave work also meant mobility. John Dickinson rented his slaves to others that needed labor and made them available to his tenants to help them fulfill their lease agreements.

In time, John Dickinson made a difficult decision. In 1776 the Quakers in Philadelphia area made it known that holding humans in bondage was an unacceptable practice. It was recommended strongly that all Quakers manumit, or set free, their slaves. In the following year 1777, John Dickinson conditionally manumitted his slaves. The conditions were set because even though this was a religious decision, the economic impact was 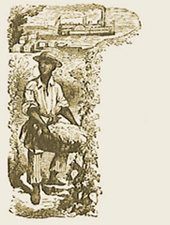 staggering. At the time, the county required a bond payment for each slave set free. Because Dickinson had so many slaves, the payment would be high. On the other hand, because grain farming did not depend on slave labor for high profits, setting free his dependent slaves, and hiring free blacks to work would be less costly. Eventually, in 1786, John unconditionally manumitted his slaves.

After the final manumission, records show a few slaves remained employed by the family. Other former slaves remained associated with Dickinson through other ways. For instance, a former slave woman named Dinah married a free black tenant of John's. Others were mentioned as living in buildings in the "peach orchard" on Dickinson's property where they were not to be disturbed. It is evident that John Dickinson was influenced by the Quaker thought as well as the economic situation. No matter why he felt compelled to free his slaves as early as 1777, he was among many in Kent County, Delaware to do so.