The life of John Dickinson was easy and rewarding compared to most people who grew up in Delaware in the 1700s. He lived the life enjoyed by only the wealthy. His father, a tobacco planter, was highly educated and served as a judge in Kent County, Delaware and earned the respect of his peers. This lineage passed down from father to son for three generations in the Dickinson family. It was the key to the man John Dickinson became.

John Dickinson's great-grandfather was Walter Dickinson. He came to the colonies in the seventeenth century. Early on, Walter served time as an indentured servant, but did not waste time settling on a career when he was freed. Tobacco was the cash crop for several colonies in the 1600s. Great profits could be made from tobacco even with only a few acres. By planting and harvesting this crop Walter began a family that survived many generations. 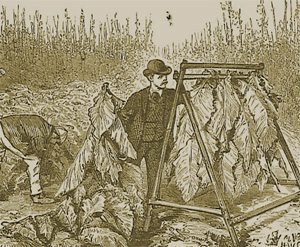 Walter's son William took over the running of the plantation his father established in Talbot County, Maryland in 1717. Tobacco was still as profitable crop. Samuel, William's son, continued the legacy left him from his father. The family home was called Crosiadore, and Samuel built strong marketing connections as well as a large family. Life in the colonies in the early eighteenth century was good if a cash crop could be cultivated. Disease invaded all levels of society. Samuel's wife and five of his seven children died. Samuel remarried. They lived at Crosiadore, where Mary Cadwalader Dickinson gave Samuel two more sons, one of whom was John.

John's life began on Jones Neck, Delaware in 1740. His father moved his second family to the area and left the ancestral lands in Talbot County, Maryland to the grown children from his first marriage. John's father began training him at an early age. Many young sons received their first lesson from their father. John's lessons centered around land management. By the mid-1700s, tobacco was profitable for only a few due to variable markets. Samuel Dickinson had the foresight to switch from tobacco planting to grain farming. Therefore, John learned to oversee the planting and harvesting of wheat, barley, rye, and corn, which remained a profitable business for many.

John's mother, Mary Cadwalader Dickinson, was a Quaker with strong convictions. Together, John's parents had a great influence on his life and helped to shape the man that was destined to become a key player in the drama of the American Revolution. Family was important to John Dickinson. In 1770, he married Mary Norris, the daughter of Isaac Norris, speaker of the Assembly in Philadelphia.

Like his father, John was a lawyer. He became interested in politics early in his career. Between the two avocations John spent limited time at home. His wife, Mary, accepted John's absences but was lonely without him. There are many letters

between the two that survive. These accounts of each other's thoughts and feelings show a strong devotion and love. This became the backbone of their relationship and helped them to continue. The two often had to compromise, even on where they lived. Mary, a strong, steadfast, solid Quaker like John's mother, continually implored John to follow the religious precepts more closely.

John and Mary had five children, of whom two survived. Both girls were enjoyed by the parents. John's absences again were replaced with letters. The letters he sent to his daughters were filled with instructions and encouragement. John was keenly interested in their education. The oldest daughter, Sally, never married. She eventually inherited the estate in Kent County, Delaware where her father grew up. The younger daughter, Maria, married into a prominent family from Philadelphia, and her children inherited the Delaware property from their Aunt Sally upon her death.

John Dickinson lived a full life. His wealth and position afforded him many advantages, but he worked hard to make something of himself. He could not have accomplished anything without guidance from his family. It was the legacy of his ancestors, the influence of his parents, and his relationship with his wife and children that made John Dickinson a devoted family man.